WE ARE LOCATED AT: 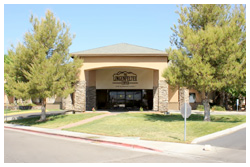 The Lingenfelter Center for Alzheimer’s Care was established in 2006 as it became increasingly clear that Kingman and Mohave County were in need of a secured environment for people suffering from the effects of Alzheimer’s Disease.

TLC is an 88 bed facility that has three separate villas. Each villa is designed so that each resident can be placed in the most comfortable and appropriate setting.